Apple Mac Mini M1 is made for Livestreaming

You’ve probably heard about Apple’s latest line of computers, the first powered by the company’s own M1 chip.

Perhaps you may have seen the positive reviews, heralding the new line released in November 2020. It includes Macbook Pros, Macbook Airs, and Mac Minis all powered by the M1. You’ve probably seen the latest addition to the M1 family, the new Apple iMacs which the company announced at its most recent event, too.

So are Apple’s new M1 computers with the hype? Emphatically, yes. Especially the Mac Mini.

The Mac Mini M1 is made for Livestreaming.

To be honest. If you were to say I’d end up buying an M1 in those first couple of months after they launched, I never would’ve believed you.

I understood that it was significant for Apple to ditch Intel and develop its own chip that powered its computers. And I read the reviews talking about what great machines the M1 computers are. Even still, I wasn’t sold. And I certainly wasn’t going to be the test dummy for the first generation of the brand new M1 chips.

Over the past couple of months, though, I’ve started to see the rave reviews coming in from consumers using the M1 Macs themselves. And most importantly, as someone who regularly livestreams, I heard the reviews from my fellow livestreamers, the types of users who would need to push these devices to their limits on a daily basis. And they were specifically doling out high praise to the new Mac Mini. 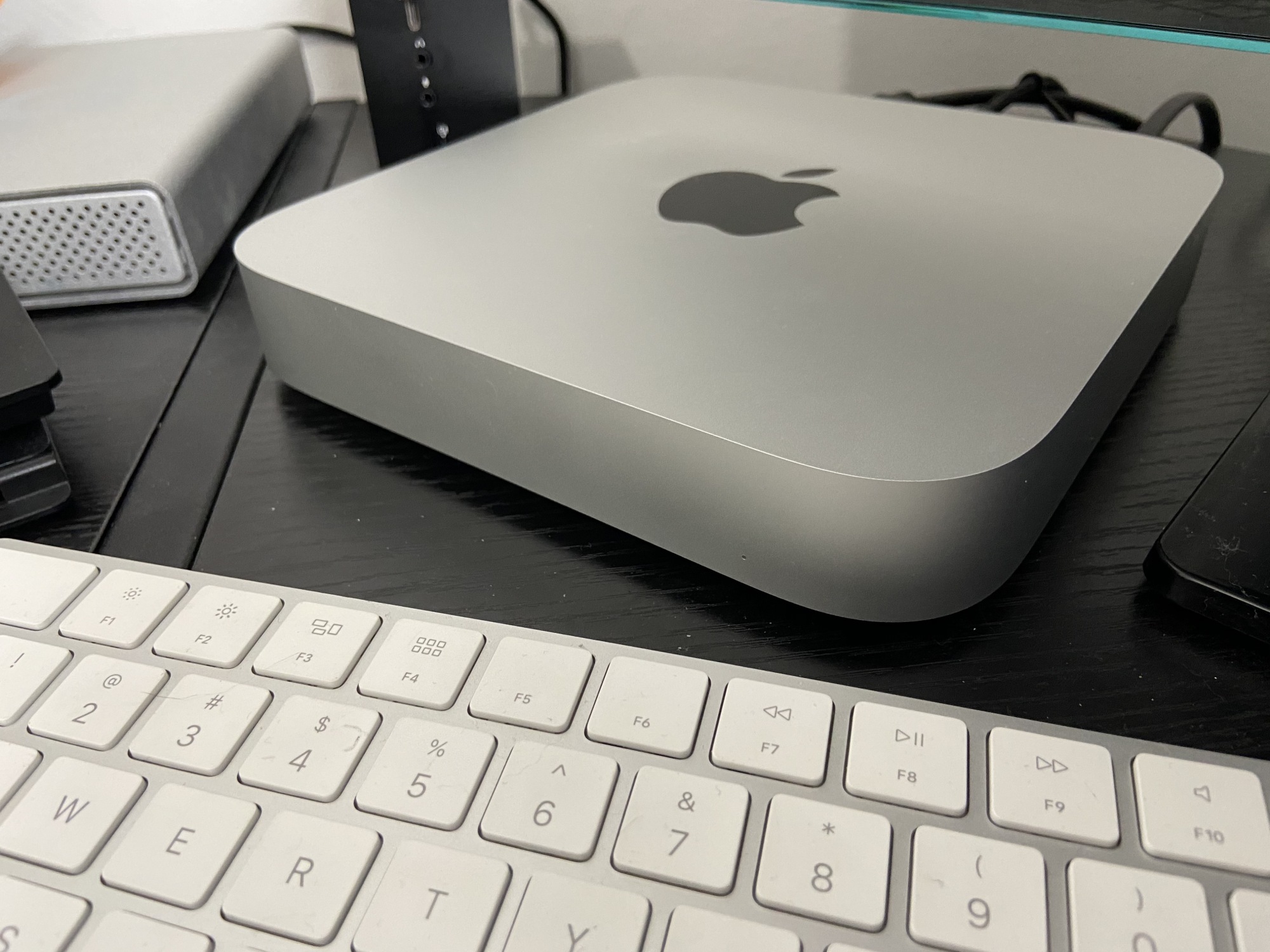 The Mac Mini M1 packs a lot of power into that classic Mac Mini design.

That’s when I went all-in and purchased the Mac Mini M1. After a few weeks of using it, I can now join the chorus of livestreamers praising it.

If you’re going live on YouTube, Twitch, or whatever your favorite platform is, the Mac Mini M1 is made for you. I doubt you will find a device this powerful, at this low of a price, that can seamlessly handle the very specific needs of livestreamers.

Putting it to the test

I put my new Mac Mini M1 through the wringer, or at least what my previous streaming computer — a 2.8 GHz Intel Core i7 Macbook Pro with 16GB RAM — would consider to be the wringer.

I have run hours-long livestreams through a livestreaming app called Ecamm Live, streaming to multiple different platforms at 1080p via a mirrorless Panasonic Lumix camera connected via an Elgato Cam Link. My previous streaming computer struggled to stream above 720p.

I’ve added a webcam as a second camera, recorded video and audio locally as separate media files while simultaneously streaming, streamed games via an Elgato HD60 S+ capture device, and added multiple live guests from different locations – all on the screen at the same time via Skype. My Mac Mini didn’t make a peep. My MacBook Pro’s internal fans would be audibly blasting on the stream at this point. 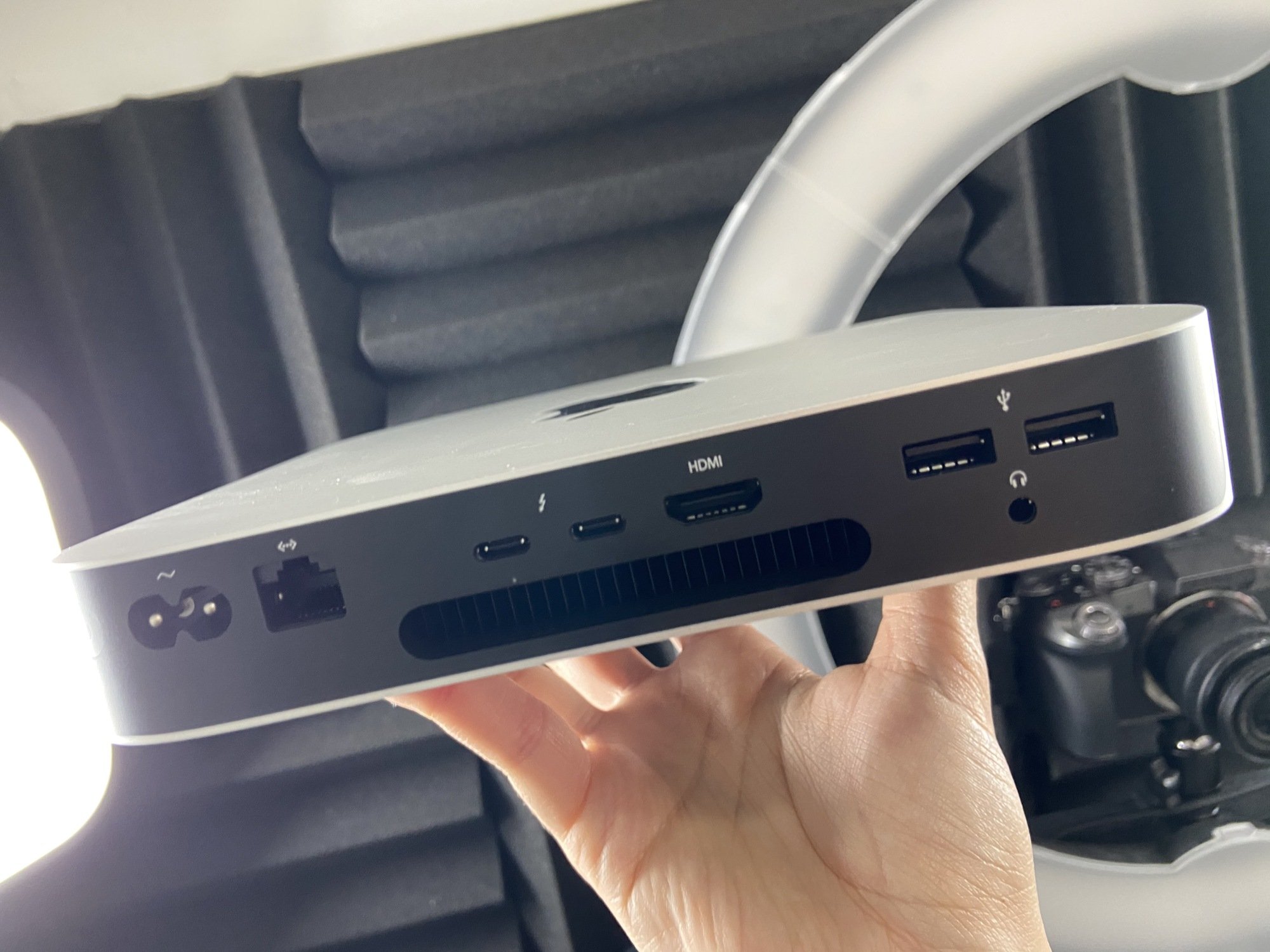 Not enough ports so you’ll likely have to purchase a docking station.

Having multiple web browser tabs open to monitor the streams and live comments as it multicast to multiple platforms via Restream while also sharing a tab to screenshare with my viewers? Forget about it with my previous setup. The live video would start moving in slow motion as it tried to keep up with everything. My Mac Mini M1 handles it without breaking a sweat.

Along with being able to handle everything I threw at it and still outputting a smooth livestream, the Mac Mini has remained cool the entire time.

And I mean that, too. Along with being able to handle everything I threw at it and still outputting a smooth livestream, the Mac Mini has remained cool the entire time. This makes for a quiet computer, which is important to a lot of livestreamers. I use a $250 dynamic mic from Shure for my livestream and you could still sometimes catch the annoying hum of my Macbook Pro fans in the background trying to cool down the computer while I was streaming. This is no longer an issue.

(Also worth noting: Broadband speeds from your internet service provider play a huge role here too. If your upload speeds are low, your stream quality will suffer. And many factors are at play too such as how many other people are using the service at the time. For that reason, I’d recommend an internet plan that provides at a minimum of 10mbps if you’re streaming in HD at 30fps. Higher quality video will require a plan with higher upload speeds.)

Which one is right for you?

The Mac Mini M1 base model, with 256GB SSD and 8GB RAM, starts at $699. I haven’t used the 8GB version and, while I’ve heard good things, I don’t think you should buy it if you’re a livestreamer shopping around for a new setup. I highly recommend you go one model up and purchase the 16GB Mac Mini M1 at $899.

Here’s why: Unified memory. The RAM isn’t sitting in a memory slot — it’s built into the M1 chip architecture itself. The plus is that the M1 computers are super fast. Many people who’ve gone with that 8GB base model Mac Mini M1 say it doesn’t run like any other computer they’ve used with only 8GB RAM. Streamers should take a good look at the Mac Mini M1.

However! The con here is that you can’t upgrade the memory in your computer at a later date. Remember, it’s built into the M1 architecture. So, if you went with 8GB Mac Mini and decided to go with 16GB later, you’d have to buy a whole new computer. For $200 extra bucks, I’d go with the Mac Mini M1 16GB model right off the bat and future proof your purchase so that it may handle all the latest apps and necessary livestreaming hardware for years to come.

The Mac Mini M1 with 16GB RAM will still be the most powerful computer you could buy at that price point. And, being that you’re going with the Mac Mini — a desktop computer — you don’t have to worry about internal storage. Just buy an external SSD to sit beside the computer on your desk. As a video creator, you know you shouldn’t be editing off the internal storage space anyway.

The cons of the M1

The M1 is brand new. Apple still hasn’t even rolled out the M1 in all of its current Mac lines yet. So, with anything new, there will be some cons.

For example, there may be third-party software and hardware you run into that doesn’t run on the Mac Mini M1 yet. One of the most popular third-party hardware makers for livestreamers is Elgato. The company makes a number of devices that help streamers use their DSLR cameras as webcams and enable users to record gameplay from video game consoles to their computers. The company has provided a list of its products that do not yet work with the M1. I had to buy the HD60 S+, a higher-priced model in its line of capture devices, in order to use it with the Mac Mini because the cheaper models were incompatible.

While I haven’t experienced any issues with OBS, the popular open-source software that most streamers use to go live, there have been M1 users who have voiced issues they’ve run into. To test out streaming on my Mac Mini, I used Ecamm Live. The software is not only made for Mac, it’s also the first (and only, as of publication) livestream application built to run natively on M1 Macs. Basically, apps built to run on Intel processors can be used on M1 Macs through an emulator called Rosetta 2, which comes with the latest macOS. This actually has made some of those apps run faster on an M1 Mac than on an Intel-based computer. Still, though, it’s going through an extra process and can’t compare to what an app created for the M1 can do. And thanks to Ecamm Live’s new M1-native app, livestreaming on the Mac Mini is a great experience.

If you’re a PC gamer, you’ll still want to stick with PCs. We’re still dealing with the Mac ecosystem here. That means slim pickings when it comes to games that run on Macs. And if you’re thinking you can just load up Windows via Boot Camp, unfortunately, you can’t do that on Macs powered by Apple’s new M1 chip. Parallels, a virtual machine app that allows users to run Windows on Mac, just recently released a version compatible with M1. However, I have yet to try it and other than Parallels, I have not seen any other virtual machine options that work with M1 Macs.

However, you can still stream games that run on Mac as well as Xbox, Playstation, and Nintendo Switch games by utilizing game capture devices such as the previously mentioned Elgato HD60 S+.

I’ve been livestreaming for years now. I worked at a live internet news show that utilized Mac Minis for streaming since the early 2010s. Mac Minis have always been popular in the space due to their price, power, and portability — even for a desktop computer. With that said, the Mac Mini M1 takes it to crazy new heights.

Livestreaming blew up during the pandemic as many people got into it as a hobby or even as a decent side income. The Mac Mini M1 gives those users the ability to run livestreams at the same level as setups that usually cost thousands and thousands of dollars but at an affordable price.